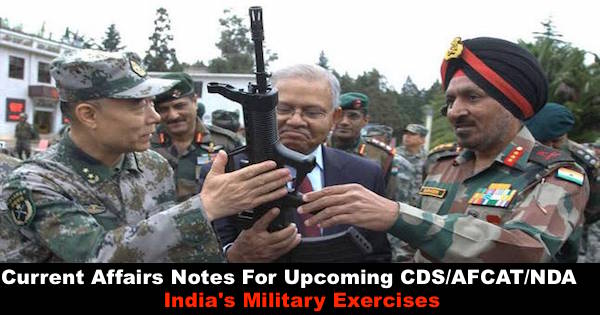 Rim of pacific is an exercise being held at Hawaii with 26 nations participating in the war games which conducted on 4th Aug- it is the largest multilateral naval exercise in the world. Indian Naval Ship (INS SATPURA) participated in RIMPAC

GARUD SHAKTI 4:- it was an INDO-Indonesia joint operation. The 14 day exercise was conducted at the Military training area,Magelang Indonesia. The purpose of this exercise was to promote posture relationship between the armies of India & Indonesia.

Naseem Al Bahr:– Indian & Omen conducted 10th edition of bilateral maritime exercise in the Arabian sea. The exercise was conducted in 2 phase: harbor phase and sea phase off the Goa coast. The first exercise was held in 1993.

SHAKTI -2016:- the 3rd INDO-France counters terrorism and counter insurgency joint exercise was held in Rajasthan.
4th IMCOR:- the 4th edition of Indian Myammar coordinated patrol (IMCOR) was established in Feb this year, along the international maritime boundary line (IMBL) in Adaman sea.
The 2 countries have started this exercise since 2013
INS Saryu and Bitra took part along with Myammar ships Aurg Zeya and FAC 563
Mayammar is also the only 3rd country with which maretime coordinated patrols.

IBSAMAR 2016:- the 5th edition of India- Brazil –South Africa maritime naval exercise, was held off the coast of Goa. This is the first time exercise was held in Indian coast otherwise it was held at all times in the coast of south Africa.

LAMITYE 2016:– this was the 7th edition of exercise held between Indian army & the Sychelles peoples defence forces. It was held in sychelles defense academy, victoria.
It is held with aim of enhancing military coop and interchangeability between the two countries.

Cobra Gold Multilateral Exercise:- for the 1st time India participated in the “cobra gold” multilateral exercise hosted by Thailand. The Indian team consented of 12 members. The theme of the exercise was “humanitarian assistance and disaster relief”. It is considered as ask as largest multi nation drill.
Ex Desert Eagle-2 :- this exercise was held between Indian airforce and UAE airforce, which was held at ali-Dhafia air base in UAE. The first edition was held in the same location in 2008

SINO- INDIA Corporation: – exercise between Indian & Chinese troops was aimed at humanitarian and relief. it was 1st  point exercise in east ladhak sector of J&K. it complimented the hand in hand series of Indo- China point exercise.

ADMM Plus exercise :- in accordance with India’s look east policy and Indian navy constant advancements on improving Indo pacific route safety. INS aircraft participated in the exercise of Asian defence ministers meeting plus (ADMM) exercise on maritime security and counter terrorism operation. Indian navy has been a regular in the multinational ADMM countries.